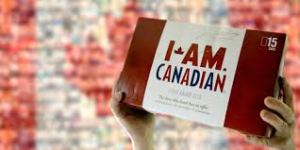 I was a big fan of the Molson Canadian Beer Fridge commercials that were released 2 years ago, so I was really excited when I was on Facebook and I saw a link to the next chapter in the story.  The original commercial (seen below) had a fridge in a few locations in Europe that could only be opened if someone scanned their Canadian Passport.  I thought that this was a great connection to their tag line “I am Canadian”.  It could only be opened by a true Canadian and then the Canadian who opened it would become literally the centre of the party and fun.

This was my favourite commercial or advertisement from Molson’s since the famous “Joe Canada speech” (seen below, because it is fun)

Now the story is continuing, but this time instead of the fridge being overseas, it is placed in Canada’s largest city, Toronto.  Also, it is not a passport to open the fridge, this time the fridge requires people to showcase the diversity that is often touted as one of Canada’s greatest strengths.  The fridge required people to be able to say their famous tag line in six different languages.

Similar to the last beer fridge, there is also a fun, behind the scenes video.

I am not a big beer drinker, but the “I am Canadian” tag line and the great advertisements that have occurred over the years has meant that when I am somewhere ordering a beer that Canadian is probably the beer that comes to mind first.  Molson has done a great job of finding ideas that really resonate with Canadians, which I think is awesome!  They have again found a way to tap into the great pride that so many Canadians have.